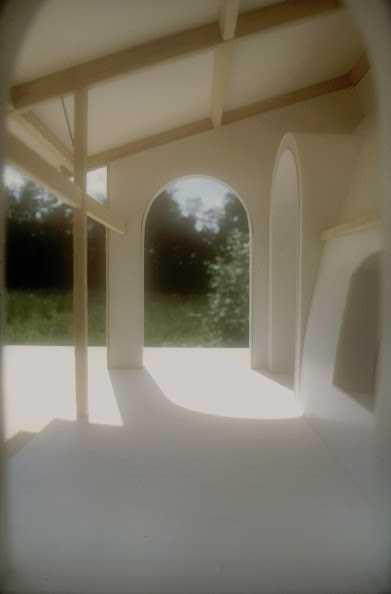 Development projects can be dispiriting by their conspicuous desire to make the punter think that they are getting value for money.  Here, a project for artists studios was used as a vehicle to explore the development process, to see how quality in design could be retained.

The initial concept was a colony of studios to provide a ‘prize’ for the best fine art students from all European countries. The proposal was that each Art College found a local sponsor who for £8000 would have secured the use of a studio for six weeks of the year in perpetuity.

To design something tangible, a site was chosen in the foothills of the Pyrenees and individual studios designed in groups with some shared functions. The structure was earth vaults with a limewash finish set in a coppiced woodland and the project dubbed Fondation Barguillere after the name of the valley.

Colleges were simply not interested, so the project evolved towards private ownership whereby people could buy a share of the ownership of a studio - or an entire studio if they so wished, ‘off-plan’ i.e. before construction. This required a contractual commitment from a certain number of people simultaneously and this is where the development process shows its head: the marketing costs involved in persuading people to buy is so enormous that the cost of building recedes as a proportion of the entire cost of the project.

The offshoot however, is that Peter Ayley now has the perfect studio and workshop, Atelier 591, for his varied work and curiosity.