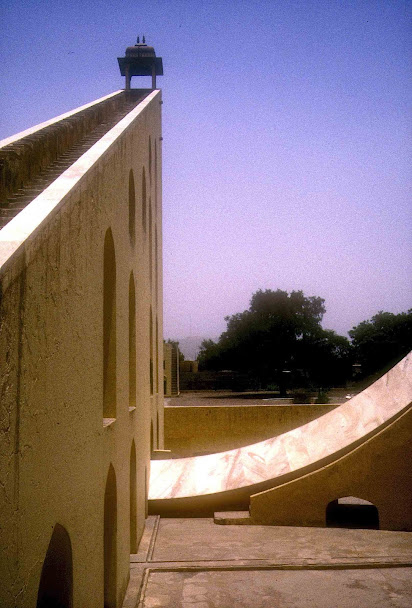 The Scientist and The Artist share many characteristics. Curiosity is the major one. Methodicity is another.

When you descend from an air-conditioned aeroplane at 4am into an ambient temperature of 35 degrees, you do indeed wonder what it will be like at noon. The thermometer settles the question and the following day’s news reports that 50 people died in the 50 degrees, in Delhi alone. In Jaipur the playground of astronomical instruments, the shadows were particularly sharp that day.

Before barometers, anemometers and nanometers were currency, scientists looked to the sky with their own eyes. There were patterns up there, there were unanswered questions. There was awesomeness. There still is. How much did the new Herschel telescope cost? Only a billion euros. Probably enough to provide water for all the human beings that don’t have it. Let them drink coke.

We are obliged to celebrate ‘science’ and ‘art’ but I prefer science to be in the service of actual life, not science for its own sake and I prefer art which ennobles civilisation instead of degrading it. Sometimes the two come together, usually in tools.