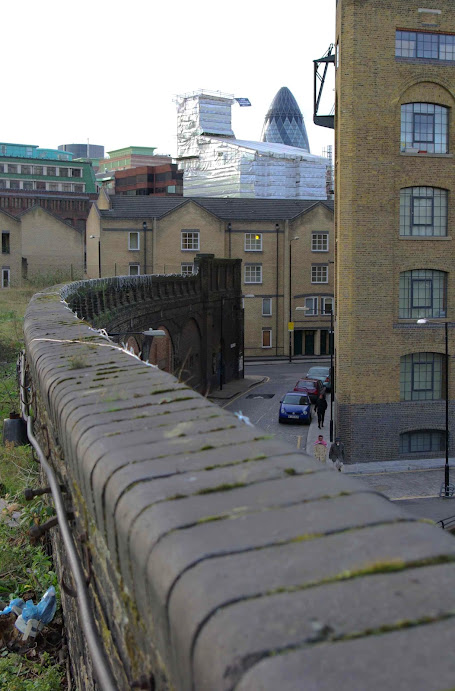 The pace of technological change accelerates, while basic human needs remain static. Britain was the originator of the Industrial Revolution only to become a post-Empire bit-player, with most of the productive physical work done elsewhere, as if everybody can or wants to consider it viable work to be 'appily working in front of a computer screen.

The built environment cannot evolve as rapidly as the consumer products, even though there have been proposals to make buildings as consumable. Our psychologies develop an inertia to have a familiarity with the the three dimensional world in which we operate, profoundly overlaid with history.

Erasing old structures which are functionally redundant allows modernity to celebrate, but in so doing the particular and collective cultural memory is lost. Such a value hardly figures on the profitometer which has entirely replaced the carefully evolved and elaborated post-war urban planning system - which was devised to apply intelligence and fairness to the ever changing urban fabric.

We prop up the country's churches in what might as well be a population of atheists and convert an old power station into an Art power-house. But we are erasing wholesale the structures which are not protected.

All buildings can be converted and adapted and usually become more interesting as a result. Such respect for cultural memory is rarely seen in some parts of London these days, as if there has been another Fire of London or a blitz where all that remains is a street pattern. Is it an intention that the developers' profit mantra banishes the people on low incomes whose psycho-geographies live in and around older unprotected buildings? Community means communal i.e. what we all share and importantly that means what we share across time. The materialist understanding that there is nothing before each of us and nothing after us, cynically allows contemporary society to forget that the meaning in their lives is actually given by the simultaneity of the past and the future in their thinking.

The over-development of so many parts of London, uniquely for profit, erases not only the historical or geographical markers and the lowly paid, it creates an environment which the displacers then take as a norm, just like people born into a slum. This reduces even further, the possibility of an understanding that an ability to share is fundamental to human culture.