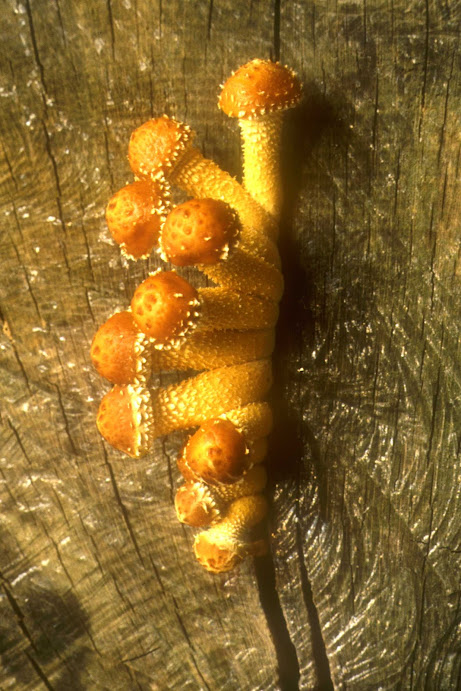 Salvation comes for all other living beings by adapting to their environment. Humankind’s over-sized brain thinks that the idea is to adapt the environment to find its salvation.

A felled tree lying for years at the edge of a wood, apparently slowly drying, still contains the ghost of its life from its forest eco-system. Within a week of being moved into a sculpture studio to be re-shaped, the spores in its shakes sprout and fruit to produce the next generation of spores. The Hopefuls will have floated about in the studio in vain, unable to reach the food that they need.

The desire to deny other life forms the equivalent of our consciousness is decidedly unfair. Consciousness is for what after all, if it is not used? Look at the speck of life in an ant and ask if any individual human being really does any better in its own context? For all its pretentiousness, the human mostly acts like an animal and worse, can kill for an idea. Mostly, animals kill for food or reproduction. Few plants are malicious.

The little red box, smaller than a paperback, with a slot in the top whose teeth allowed coins in but not out, was de-bossed with golden words ‘tall oaks from little acorns grow’. A tiny key allowed access to the tiny savings which must have amounted, at today’s prices, to the entire monthly income for a family in Kashmir.

Now I pass through my woods in May and find an entire carpet of new oak shoots, optimistically brandishing their virgin leaves towards the sun. Six months later, only a few have survived, almost all smothered by ferns. Grow any one of the 250 species of oak in a man-constructed nursery and you can create a tree from 90 percent of the acorns. For better or for worse, we modify nature.