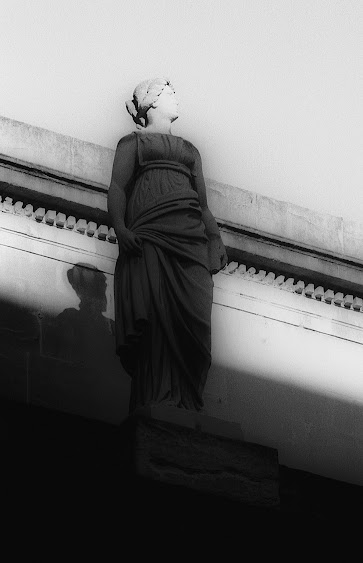 These photographs were compiled into  a small black and white booklet for sale in Bristol.

Inspired by the I-spy books, the intention was to get people (particularly secondary school children) out and about in Bristol to see at first hand the quality of the stone buildings in Bristol.

The descriptive essay in the booklet is copied below.

The photographs in this booklet concern themselves with hand created stone buildings, in Bristol, broadly of the nineteenth century. Buildings made from solid objects cast shade onto themselves and many of these images are particularly of interest because the shadows emphasise the form of the building and give the eye interest.

Before the industrial revolution, there was no electricity and life was lived primarily by daylight. Man’s cultures developed in this environment and showed no restriction for it. People lived outside most of the time and knew nature as we never will. Buildings were always made with what was available to hand, to enclose volumes which satisfactorily modified the external environment for human comfort in inevitable harmony with the laws of physics.

When stones were put together, the process developed an architectural language with its own rules, just as the languages that we speak, but as well as the technical language there was always an iconographic language, which, while not totally intrinsic to the means of construction, provided a layer of meaning and often great beauty. The language allowed every building to have its own particular character.

We all inherit the results of those many years of work but the nineteenth century was the last period in Britain where highly skilled craftsmen produced stone buildings quickly, to a technical standard never previously seen. The iconography was perhaps not relevant to the emerging mercantile culture, but had been sustained by the inertia of traditional craftsmanship, supported by wealth and the meticulous studies of historic architecture. Is it not remarkable that a language developed by the Greeks three thousand years before, was often being used?

These buildings were an everyday production by adequately competent masons in a political economy where people that worked physically were paid extremely little. Today, relatively speaking, wealth is better distributed, which is why very few people are in a position to request a hand-chiselled stone building. Today’s masons are almost invariably occupied in the repair of the much earlier stone buildings which served as the inspiration for the nineteenth century buildings shown here.